Use Personas as a Portrait of Your User

An edit of this article originally appeared on Konsultbolag1

Developing a system that’s perfectly suited for its audience is not an easy task, whether you’re working with requirements or in testing. You rarely, if ever, get the chance to work closely enough with actual users to easily get their opinions on how your system should be designed.

Much of the benefit of agile methods like Scrum is that they constantly remind you of how important the client and the end users are.

Agile methods give users an active role, involving them in requirements development, and verifying and validating what the team develops in each sprint.

Unfortunately, harried development teams often neglect these principles, and fail to have any end-users represented in requirements and testing work.

Truth be told, we often have no idea what the end user will really think of the systems we develop. Teams who work with requirements and testing often have to shoulder the burden of the users’ role – and personas are a powerful technique for helping the entire project team understand what end users want, and who they might be.

In this article, you’ll learn more about how to use personas as an effective tool for understanding your users better.

How to create personas?

Personas may seem simple, but a lot of work goes into producing them. Your project’s personas are meant to reflect your real users, so you can’t just make them up out of thin air or guess your way to a complete picture.

Use traditional data-gathering techniques such as interviews, questionnaires, and workshops. If you’re building a system for a company, ask about age range, demographics, educational levels and any computer certification the users of the system have.

It’s a good idea to develop a handful of personas for the system – not too few and not too many.

Logic goes a long way when creating personas. For example, our team was once developing a system to be used for making pension payments and one of our personas was a recently retired male called Holger.

This persona led us to increase the specification for the maximum number of users logged into the system at a given time, since we imagined that our ‘Holger’ would want to take the time to read all the information before he went on to the next step in the application.

In other words, we realized that our user would be spending a longer time in the system than what we would typically allow for a younger user. 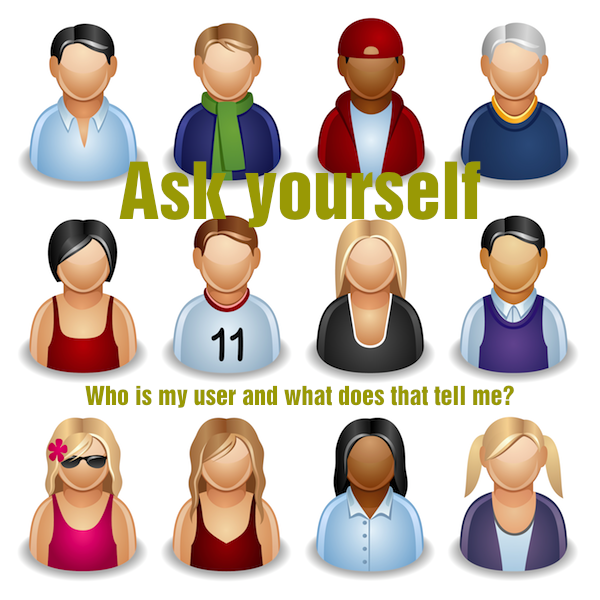 Our persona also helped us logically deduce that Holger would like a simple, clean interface with a clear structure and no unnecessary functionality.

This led us to prioritize developing clear confirmation messages for user input, rather than developing a flashier interface or lightning-fast performance.

Personas also work well when more than one person is working on part of the project. When we were developing requirements for the shopping cart of the online cell phone shop, we fell into a long discussion about how we ought to promote accessories after a customer had placed a phone in the cart. As three strong-willed and stubborn people we each staunchly defended the approach that we personally preferred, and got nowhere.

We outlined the three options and asked ourselves the question, “Which of these would Marco (one of our personas in this project) like best?”

We continued the method, asking the same question for the four other personas we had developed in the project.

We clearly envisioned two very different behavioral patterns among our intended target groups, and arrived at a creative solution: depending on the phone that the customer put in the basket (which also correlated with the user group), the site promoted the accessories in two different ways.

Other uses for personas

Personas are a great method to use when you’re writing an article or developing a course. Although it might sound ridiculous at first, it’s a well-proven method that will help you create focused deliverables that actually have very broad appeal.

You get the opposite when you try to hit a diffuse target: for example, this article should speak to 21-65 year olds of both genders with completely different backgrounds, knowledge, experience, and interests. What you get is something lukewarm and mushy that doesn’t appeal strongly to anyone.

Where else can I see personas at work?

If you want to see personas in another context, go to your nearest IKEA store and look at their displays. Whether it’s a 250-square-foot apartment for Marianne the college student, or a bedroom for twin infants Mary and Martin, IKEA is exceptionally good at developing personas.

What IKEA achieve by designing to fit their specific personas is that they make their products more attractive and appealing to many others.