Priority and Severity – what is the difference and when should you use which?

All decent bug tracking and issue tracking tools will include a field in their bug report template for Priority and another field for Severity. These fields are used to describe the importance of a given bug by the person who is reporting it to the person who will eventually handle it.

What is difference between Priority and Severity?

The big question is this –what is difference between Priority and Severity? And which one should use when?

The image below should explain how to triage bugs (triage in a hospital is the process of determining the priority of patients’ treatments based on the severity of their condition).

However, for added detail, check out the bullet points below which should explain Priority and Severity even further. 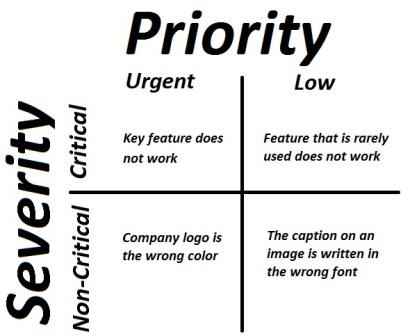 The four common categories of Severity;

Major Defect: 3 – Major functionality not working but able to continue testing the application.

Minor Defect: 2 – Bug in Functionality but in the sub module or one under the other

Cosmetic: 1 – Issues in location of object or ‘look and feel’ issue